Whaling 'too cruel to continue'

Animal welfare campaigners say methods of killing whales are so inhumane that all whaling operations should cease. A coalition of 140 groups, Whalewatch, says many whales do not die quickly when hit, and tests to decide exactly when a whale is dead are inadequate.

The well-known UK naturalist Sir David Attenborough says in a foreword that Whalewatch's report shows "there is no humane way to kill a whale at sea".

But whalers say their methods are not cruel, and reject calls to end whaling.

The Whalewatch report, Troubled Waters, is published to mark the start of a global campaign against whaling.

Coalition members, from 55 countries, include the World Society for the Protection of Animals and the Whale and Dolphin Conservation Society.

Whalewatch is lobbying the International Whaling Commission to halt all commercial and scientific whaling, to maintain the commercial whaling moratorium in force since 1986, and to concentrate on the issue of cruelty.

The report says more than 1,400 whales are likely to die this year alone, despite the moratorium.

Most whales are killed with harpoons designed to explode inside them, though small traditional coastal communities in the Arctic and elsewhere use other methods.

Japan and Iceland kill them for what they say is scientific research, allowed by the IWC; Norway is not bound by the moratorium because it voted against it.

The IWC was established in 1946 to conserve whaling, and also to conserve whales. It holds periodic workshops on humane killing methods, but given the deep splits in its membership between supporters and opponents of whaling, agreement is elusive.

Dr Nicola Grandy, the IWC secretary, told BBC News Online: "Our competence to address the issue of humane killing is questioned by some members.

"All member governments take it seriously, but there are different views on whether whaling is inhumane and should be stopped.

"The Norwegians, for example, do kill a high percentage of their whales instantaneously."

Whalewatch says Norway reported around 20% of whales failed to die instantaneously in 2002/3, and that Japan reported almost 60% were not killed outright.

It says the average estimated time to death is more than two minutes, and that some whales take over an hour to die.

It is also concerned at the use of rifles and other ways to despatch whales which have survived being harpooned.

It says criteria for assessing the time it takes a whale to die are unreliable, with some animals possibly surviving long after they are judged to be dead.

Whalewatch concludes: "On grounds of animal welfare alone, all whaling operations should be halted."

John Opdahl of the Norwegian Embassy in London told BBC News Online: "For many years, the IWC has given high priority to efforts to improve whaling methods in order to minimize unnecessary, protracted suffering, and Norway has always led the way in these efforts.

"The methods now used in minke whaling are as good as or better than those in other forms of big-game hunting as regards both death times and the percentage of whales that are merely injured."

Dr Lillie wrote: "If we can imagine a horse having two or three explosive spears stuck in its stomach and being made to pull a butcher's truck through the streets of London while it pours blood into the gutter, we shall have an idea of the method of killing. "The gunners themselves admit that if whales could scream the industry would stop, for nobody would be able to stand it." 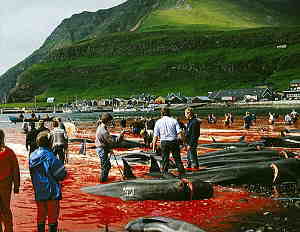 The Faroe Islands Tourist Board